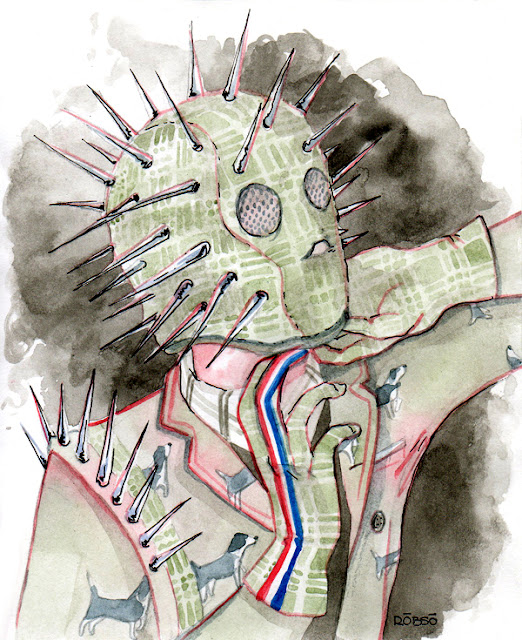 Besides the monster-like proportions and shapes & the interesting punk twist on the sartorial work, every single detail of the garments shown on Browne's collection was taken in consideration. The tartan designs were combined with series of metallic studs of various sizes, following different patterns. The use of embroidered graphics is also presented in an impeccable way. Even the music played during the runway added a more intense and epic vibe to the collection; as it usually is on every Thom Browne collection.
______

Enjoy the runway show:
via Thom Browne
Posted by Roberto No comments: 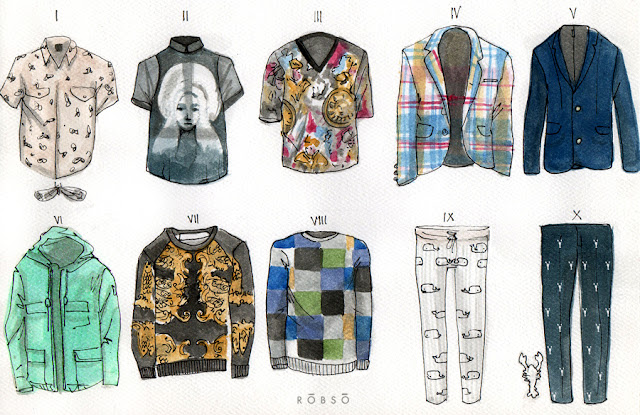 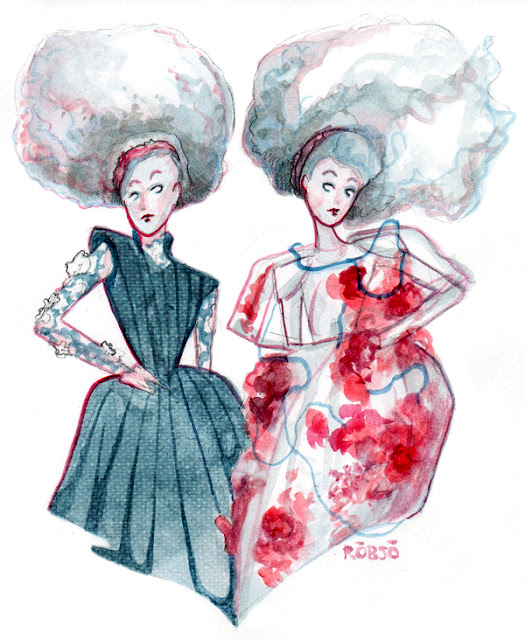 via Style.com
Posted by Roberto No comments: 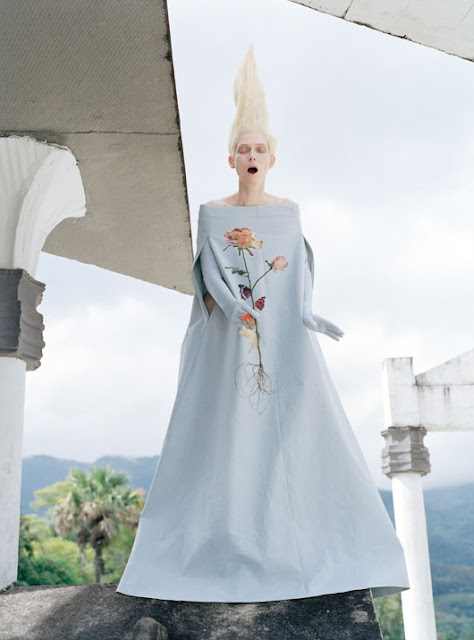 I usually come across fantastic fashion shoots as I scroll down my tumblr. dashboard; this particular time however, there was something that triggered an immense excitement in me, as well as an endearing déjà vu feel. I had already seen the latest Tim Walker shoot photos he did for W Magazine, featuring the ingenious Tilda Swinton, but it was this particular image above that sparked something inside my memories archive. I've only seen that particular kind of architecture in a very far away place near my hometown. And in fact it is the place I was thinking of: a fantastic set of constructions built in the jungle by creative mastermind Edward James, called 'Las Pozas' in Xilitla, México. (you can read a brief story of this place over here). 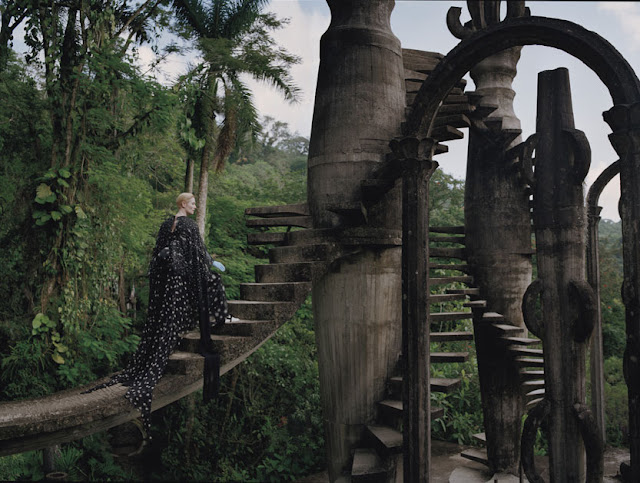 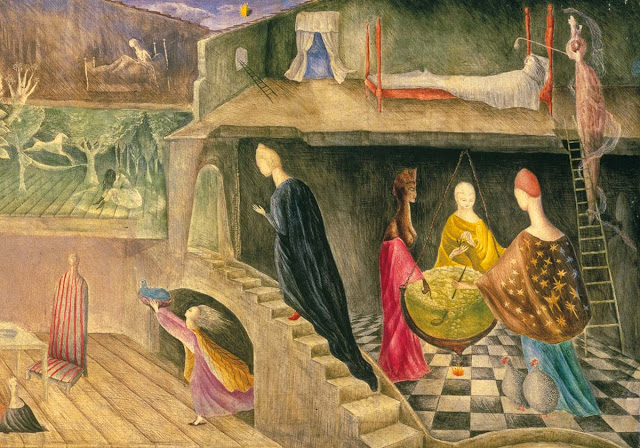 As you make your way through the quirky passages and the fantastic vegetation, you can confirm that sense that these huge surreal structures are actually merged with the landscape; it's like they're part of it and they coexist to exude the beauty James intended. I've visited this location 3 times, and it's been quite a delightful experience, it's a fantastic thing to see these artistic manifestations take place in this beautiful places you don't get to see on a daily basis. Below you can see some pictures I took on my last trip. 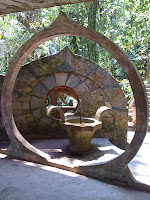 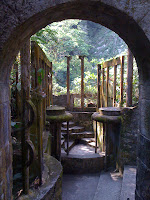 Tim Walker's work never ceases to amaze his audience with his superb work. His photographs have a fantastical vibe where the unreal merges with the real, blurring the line of what's considered as a normal perception of beauty. This same premise was the basic component of the surrealism / magic realism movement that took place among artists in the mid 90's mexican circle. Artists such as Remedios Varo and Leonora Carrington created a dimension of their own, worlds that obeyed their own rules and made sense in their own way. 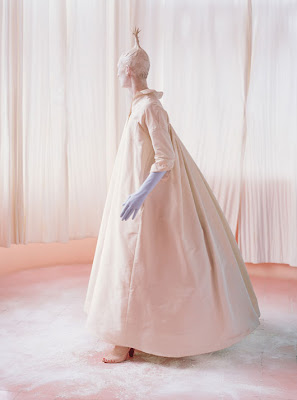 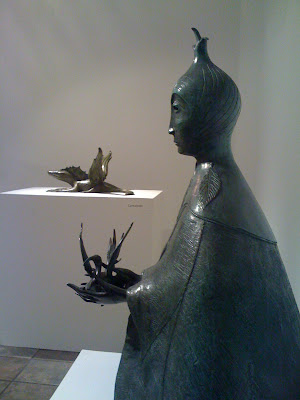 Last year I had the chance to experience several art exhibitions where the work, of both Varo and Carrington, was exposed. I took pictures of some of the sculptures made by Carrington (I believe she was around her 90's when she made the one you see above) so you can admire the fantastic way Walker condensed his vision on this shoot. Believe it or not, there's sort of a timeless fashion style in the pictorial work; fashion is a very influential and resonating factor in the surreal movement as it works as a connector between the fantastical characters and their surroundings. 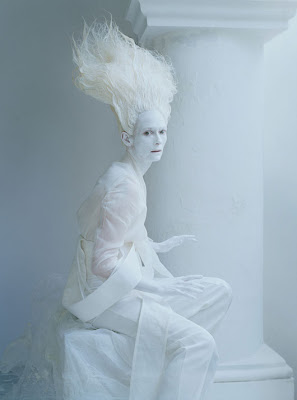 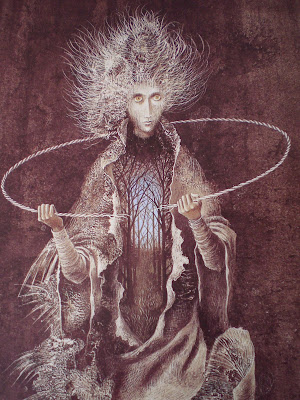 I'm in love with the styling done in 'Stranger than Paradise', not only because of the fact that Swinton's unique physical features fit so well in this aesthetic, but also because of the fantastic garments she's wearing. I find Walker's dynamic so interesting, the way he adjoins the runway onto his compositions. There was a time when 'Las Pozas' was almost decaying, therefore, tourism had to be incited in some way to keep this surreal place alive; looking at the whole set of photographs I can't help getting the feeling that the vision of the melange of surrealists takes an even more vivid representation of how this particular place should look like, giving it some kind of life. 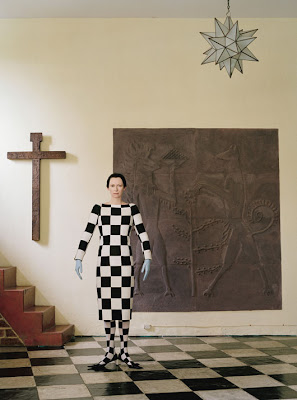 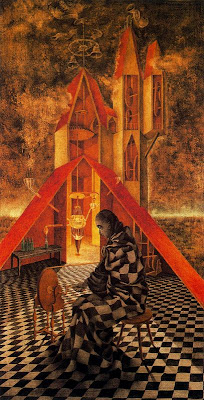 The resonance of the work of an artist is what makes him or her feel realized, it gives one the freedom not only to create realities, but to interpret them. It's thrilling to actually watch how fine arts, fashion and photography combine to tell stories, regardless of the difference in eras, movements, language and geography. I think there's some sort of universality to it, images talk by themselves and invite you to believe what they're saying. 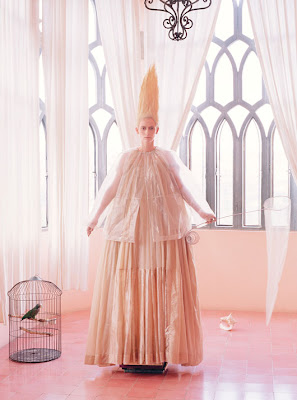 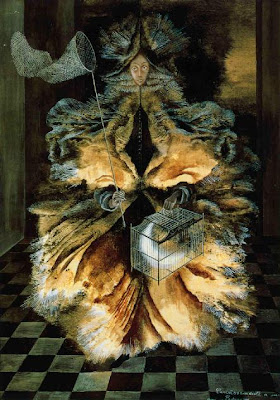 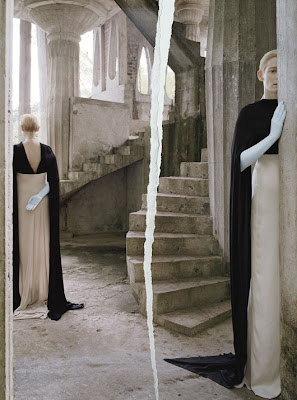 Overall, I think this whole collection of concepts and artistic statements go way beyond today's perceptions. W Magazine's 'Modern Beauty' premise makes me think about what we as a society think beauty is, and how most of the times we get into the debate of what the true concept of beauty should be (and it goes on and on). However, I believe that Walker gives us a clear example of what beauty is all about: the celebration of nature's mystical paths alongside the human's most intricate yet amusing ways of expression. ★
Tilda wearing Ann Demeulemeester dress and Cornelia James Gloves 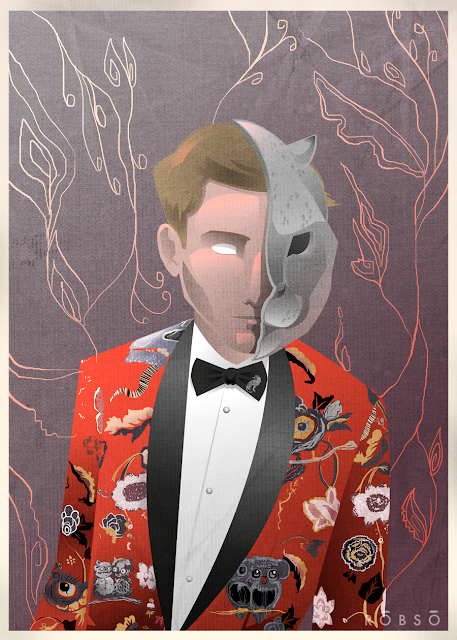 "When Lamont opens his eyes again, he realizes he is in a strange forest.

From tree branches to small flowers, everything is glowing and the scene is beautiful. Interesting enough, this is actually a place Lamont has dreamed of when he was small and he cannot express his excitement. The monsters and the strange clouds are here as well and are following him wherever he goes.

They have finally arrived to a small pond and when Lamont looks at the reflection of the water, he cannot help but scream.

He does not have any bruises on his face or any part of his body. However, part of his face has now become the face of the monster and he knows the body is starting to transform. Lamont now believes he might be the leader of these monsters and there may not be a way to back to the original dimension...

Is this a dream? Or is this the new dimension? Someone named Valerie may be able to give us some clues."

This is the end of the menswear series as Marcus Kan and I agreed to add a parallel story, inspired by the womenswear collection. The story will continue unfolding in May. 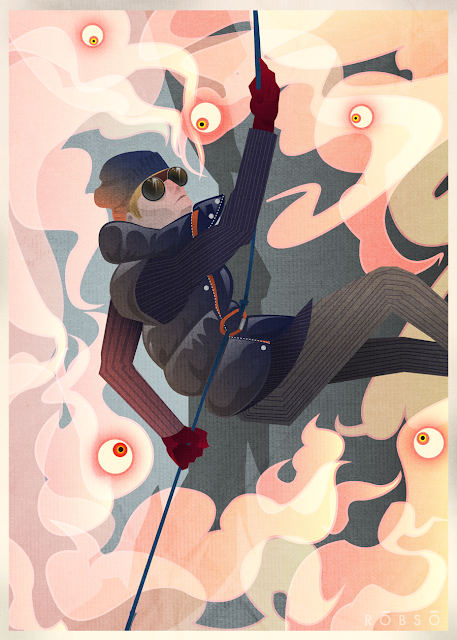 "After a good night slepp, the snow has finally stopped and the monsters are gone as well. It's time for Lamont to start climbing to the top of the mountain and see what's there. Everything is very smooth. Just when he is about one quarter of the journey, strange things start to happen. Lamont is surrounded by strange floating eyes covered in mist, and they seem to be blocking his vision intentionally. He tries his best to continue climbing up the mountain and suddenly, the rope breaks in two parts. Lamont is falling down like a meteorite and the clouds are trying to rescue him. Is Lamont going to die?"

Stay tuned and follow the story at Draw a Dot too.
Final piece coming on Thursday. 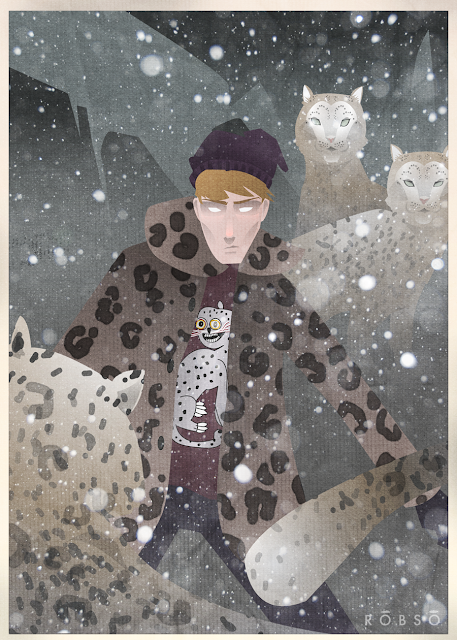 "After exploring the Kingdom of Bhutan, Lamont has finally arrived at the bottom of the legendary mountain. Snow is falling heavily so he has decided to set up a tent and stay there for a night. Just when he is about to sleep, he notices there are shadows of creatures surrounding his tent. He heads outside and there are 6 monsters resembling snow leopards, waiting for him. Of course, Lamont is in a slightly shocked mode but strangely, there is no sign of these monsters are here to hurt him as they are somehow acting like his guards. Even though Lamont has no idea what is going on here, he now starts to believe this myth actually exists."

As a brief parenthesis, I find the details on this collection quite interesting. The stylization of the snow leopard added an eerie vibe to the collection; I'm obsessed with the sweater.

Stay tuned and follow the story over at Draw a Dot too. 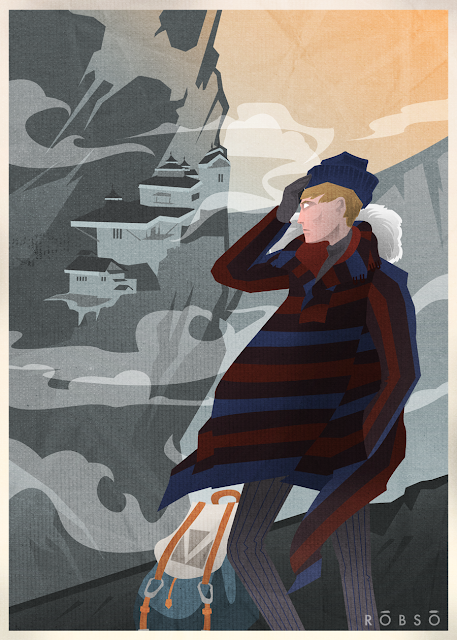 Inspired by the Fall 2013 Louis Vuitton Menswear collection, Marcus Kan (creator of á la mode and Draw a Dot) and I have created a new series of illustrations called 'Soul Voyage'.

“There is a legend about a mountain near the Kingdom of Bhutan. People say that if you climb to the top of that mountain, you will be able to enter a new dimension and find your new soul. However, there is a tradeoff – you will not be able to come back to this world.


Lamont is an adventurer and always hopes to find out if this legend exists or not. Finally, he has decided to make a trip to Himalaya and his last stop is the Kingdom of Bhutan…”
Stay tuned and follow the story over at Draw a Dot too.
Posted by Roberto No comments:

Roberto Sánchez / México
robso.art@gmail.com
________
© All illustrations by Roberto Sánchez. Please do not use or edit without my permission.